But instead of manually typing the numbers into the formula you can link the ‘number’ portion of the syntax to a cell reference e.g

Or take it a step further.

If you have lots of values that need to be rounded and you may need to change the ‘num_digits’ value, link that portion of the syntax to a control cell e.g

=ROUNDDOWN(A1,A3) where the ROUNDDOWN digits value is held in cell A3

There will be a future article discussing control cells.

At Happy Duck we build bespoke business and financial management tools for small, medium and large companies that help them achieve their goals. This makes us happy. Find out more about us and about our services.

Receive tips, articles and advice direct from HDHQ to your inbox. 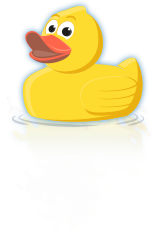 Receive tips, articles and advice direct from HDHQ to your inbox.